This week we had a rehearsal coupled with a band barbeque. After many beers and some rather haphazard grilling practices, we got to the business of playing music. One of the new charts we tried is a Henry Mancini instrumental from the Peter Gunn series called “The Brothers Go to Mothers.” Only Tommy could have found us this unknown gem. Gary brought in a few Benny Goodman charts. I finally learned the bass/piano lick that goes under the melody of “Seven Comes Eleven.” Gary is a true master when it comes to the Benny Goodman “small group” classics. And finally we grooved on Michael Jackson’s “The Way You Make Me Feel.” I was struck by how good a songwriter MJ was. I credit The Sweater Set here. I heard Sara Curtin sing this at a party for the Strathmore Artist in Residence program and was knocked out by what a cool cover it makes. Once you take all the Quincy Jones production and indelible high-voiced squeals out of the MJ recording, you are left with a really nice, strong song. I think that with this arrangement, we made it ours. (OK—it will always be his.)
—Charlie 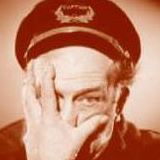 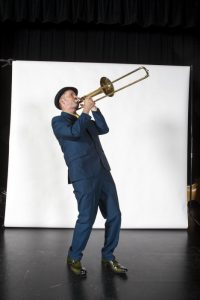 We needed some new publicity stills to go along with our new album, and we were psyched when photographer Chester Simpson said he wanted to take them. A prolific contributor to Rolling Stone and onetime student of legendary rock-and-roll photographer Jim Marshall, Chester has taken portraits of most of the biggest names in pop music of the last 30 years.
Chester introduced us to The Old Town Theater in Alexandria VA. It is a beautiful old venue that has recently reopened for concerts. While we were there, we got to talking to the management and, badda bing badda boom, we’re playing a series of concerts there! The shows will be on the first Tuesdays of the month, starting in September, and will feature opening acts from the ranks of the Strathmore Music Center’s Artist in Residence program. It will be an exciting collaboration–and a way to introduce you to some terrific new artists we love.

Our new album, Dot Dot Dot, is here! We’re having a CD release party on August 22 at The Hamilton in Washington DC…but if you just can’t wait til then, you can buy the album as a CD or digital download at our online store. (We’ll have vinyl LPs for sale at the party, along with CDs, but they are still at the pressing plant.) The disc includes all of our most requested new songs, including “The Coolest Car” and Gary’s smoking hot sax solo, “My Losing Streak.” The album packaging–including our first-ever lyric sheet–was created by local graphic designer Adriana Cordero.